Your message has been sent.

Potomack will be closed Saturday, July 2 - Monday, July 4, for the holiday.

ATTENTION: You are currently using an unsupported browser. We recommend switching to Google Chrome or Edge for the best on-site experience.
An error has occurred while processing this page. The site administrator has been notified. We apologize for the inconvenience.
Back to catalog

Back to catalog
Lot 37 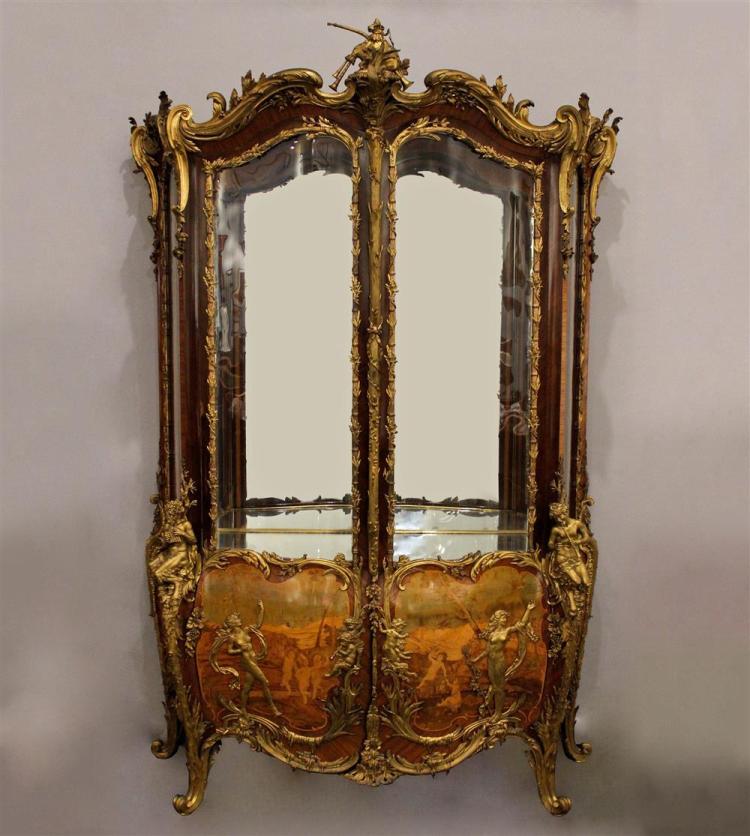 While the inspiration for this extraordinary vitrine clearly has its roots in the sculptural genius of Léon Messagé, the actual maker of the case is more problematic. Messagé was for at least the early part of his career an independent sculptor and designer, designing furniture in an elaborate rococo revival form as well as silver and other decorative objects. He is most remembered today for his sculptural mounts and his ability to translate his elaborate drawings into three dimensions, creating gilt-bronze models of a unique character and form. He published a quantity of his work in his Cahier des Dessins & Croquis Style Louis XV, the second issue being circa 1890 whilst Zwiener was still in Paris and Linke had become an independent maker in his own right. Messagé's 'Cahier' shows that he too was an independent designer, having supplied designs to Linke since circa 1885 and working with or for Zwiener since probably 1880 or 1881. There were five sections with an elaborate title page surmounted by the sculptor's cipher or talisman of a wing, a play on his own name as the messenger to the Gods, a feature he incorporated many times on the mounts he designed for his patron and seen on the offered lot just below the knee mounts. The combination of musical instruments, figures of Pan, which is a departure for Zwiener and Message as well as Linke, and dancing figures on the lower doors leads us to believe that the offered lot was a special commission.

Such case pieces were exceptionally expensive at the time of making, combining both the best technical aspects of furniture making by one of the world's most prestigious makers, with cabinet making and bronze casting of world class proportions, emulating the very best of the eighteenth century but arguably surpassing the technical ability reached in the ancient regime in Paris. The very best of the Paris cabinetmakers with a record for making elaborate cases were Francois Linke and Joseph-Émmanuel Zwiener, both candidates for the present lot. It is only in recent years that it has become possible to distinguish between the two makers, sometimes categorically; sometimes the attribution is based on experience and circumstance. The difficulty arises simply from two common factors. First, Linke is believed to have started his early life in the 1870s in Paris working for Zwiener. This has never been proved categorically but the circumstantial evidence is quite compelling. The mother tongue of both craftsmen was German, Zwiener born in Germany, Linke in Bohemia in the Austro-Hungarian Empire. Linke as a young journeyman arrived in Paris in 1875 where he sought sanctuary amongst the host of immigrant workers in the Paris furniture trade 'les hommes vapeur'. Within this group were many other German speakers and with his evident skills as a cabinetmaker and his highly disciplined training was inevitably drawn to the best maker in Paris at the time, Joseph-Émmanuel Zwiener. In Linke's native village of Pankraz the local record book, the 'Gedenkbuch', states that he (Linke) 'worked in Paris with German masters'. His bachelor lodgings were in the heart of the French furniture trade and in the same street where Zwiener had his workshops at 12 rue de la Roquette. If this is not enough evidence of their collaboration or at least that Linke worked for Zwiener, the common link with both makers is the French sculptor Leon Message (1842-1901). The underlying principle of Message's strategy was the light-hearted rococo, so evident in the present lot, that grew out of the Baroque popular in Royal circles in Paris in the 1690s.

The blurring of manufacturing styles and techniques between these two consummate world-class makers does not afford a definite attribution. However there is a certain lightness that Linke infused into his work not always seen in Zwiener executed furniture. This coupled with the fact that most Linke pieces with gilt-bronze mounts have Linke's reference number on the reverse of the bronze, normally coupled with his name 'LINKE' or initials "FL'. Francois Linkes's brother Clement, a locksmith, was ordinarily employed to provide his finest furniture with locks, and there are no signatures on the offered lot. Zwiener sometimes use the mark 'ZN' on the reverse of his bronze castings but not exclusively and, seemingly, not at the very beginning of his career in Paris.

Joseph-Emmanuel Zwiener was born in 1849 in Germany and worked in Paris between 1880 and 1895. He established his workshop at 12, rue de la Roquette, becoming one of the premiere haut luxe cabinetmakers of the late 19th Century. The exceptional quality of Zwiener's craftsmanship and extensive usage of fine gilt-bronze invites comparisons to the work of famed ébéniste, François Linke (1855-1946). Working in several styles fashionable in Paris at the time, Zwiener copied mainly Louis XV pieces from public collections, adapting them in his own exuberant interpretation of the rococo. At the L'Exposition Universelle in Paris in 1889, he received the gold medal and a note of high praise from the jurists: 'dès ses débuts d'une Exposition universelle, [il] s'est mis au premier rang par la richesse, la hardiesse et le fini de ses meubles incrustés de bronzes et fort habilement marquetés.' In 1895, Zwiener was summoned to Berlin at the request of German Emperor Wilhelm II (1859-1941) at Schloss Neues Palais, Sans Souci, Potsdam. Zwiener was recorded as an exhibitor for the German Pavillion at the 1900 Exposition Universelle.

Léon Messagé was a gifted Parisian sculptor and was responsible for much of the design and creative work for Roux et Brunet of Paris, of whom one brother, Alexandre Roux had established a highly successful business in New York as early as 1836. Subsequently Messagé designed for Zwiener in the 1880s and from circa 1895, for François Linke. It might be argued that without Messagé's creativity, Linke would have remained a fine cabinet maker selling to local clients and dealers and may never have reached out so successfully to the world stage. His Croquis & Dessins, Style Louis XV, Bronzes, Orfêvrerie, Décoration, Meubles was first published by the sculptor himself, from his Paris address of 40, rue Sedaine (undated). There were five sections with an elaborate title page surmounted by the sculptor's cipher or talisman of a wing, a play on his own name as the messenger to the Gods, a feature he incorporated many times on the mounts he designed for his patron and seen on the offered lot just below the knee mounts. The interesting and conclusive connection between the three masters, Léon Messagé, Joseph-Emanuel Zwiener and François Linke can be seen in a black and white photograph of Messagé's workplace, illustrated C. Payne, François Linke, 1855-1946 - The Belle Epoque of French Furniture, Woodbridge, 2003, p. 74, pl. 72, showing the impressive model of the large Linke régulateur, index number 551, together with a photograph of Zwiener's cabinet that won the gold medal in 1889 (op. cit) -
h:92 w:65 d:21 in.

Provenance: Purchased from George Georges in the 1950's Los Angeles CA. chalk mark to the back and base GGS 21; Collection of Mr. and Mrs. William Myron Keck (founder of The Superior Oil Company), of Owlwood Estate, Beverly Hills, CA; by descent

You agree to pay a buyer's premium of up to 30.0% and any applicable taxes and shipping.